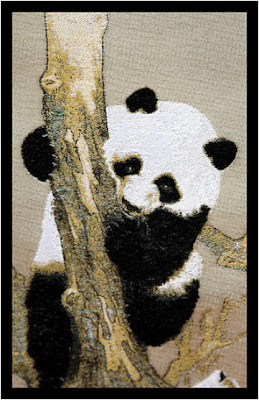 Shu Brocade，also called Chengdu brocade，made in Sichuan originated from Han and reached its heyday in the Wei, Jin, Sui and Tang Dynasties. It became the primary kind of traditional silk brocade and is one of the four most famous brocades (Yun brocade of Nanjing, Suzhou Song brocade of Jiangsu, Zhuang brocade of Guangxi) with a history of more than 2000 years. Shu Brocade is featured for luxuriant appearance , bright colour , primitive and elegant pattern , meaningful and propitious design, and imbued with rich folkloric and regional characteristic . In the Tang Dynasty, Dou Shilun, Duke Lingyang, created a set of designs for Shu Brocade, which was known as the "Duke Ling Yang Pattern".
Posted by Sharon at 6:24 PM