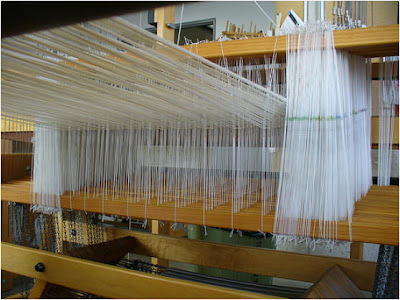 This particular loom is called dobby loom.A Dobby Loom is a loom in which each harness can be selected without using treadles; a manual dobby uses a chain of bars or lags each of which has pegs inserted. The pegs select the harness to be moved. A computer assisted dobby loom uses a computer program to select which harness is to be moved. In either case the harnesses are lifted or sunk by either legpower on a dobby pedal or electric or other power sources. This is in contrast to a treadle handloom, where the harnesses are attached by cords to a limited number of different treadles to select and move the harnesses.

Dobby looms allow a huge variety of weave structures which a treadle loom might not, due to the lack of treadles. A floorloom is limited in the amount of treadles it can use within the loom frame, but a dobby need only add bars to the dobby chain to enlarge the loom's weave capacity. A normal eight harness floorloom has ten or twelve treadles but a dobby device mounted on the same loom will use a chain of bars ranging from twelve to seventy. The average dobby chain will have approximately fifty bars.

A Jacquard loom is an example of an adaptation from a dobby loom. A Jacquard device mounted atop a loom will lift the individual heddles and warp threads. The individual heddles and warp threads can be controlled by a computer or a series of punched cards which select them to rise or fall. Power is usually supplied to the loom to move the many heddles involved.