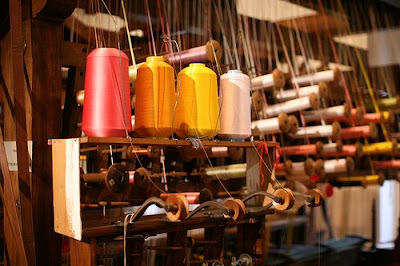 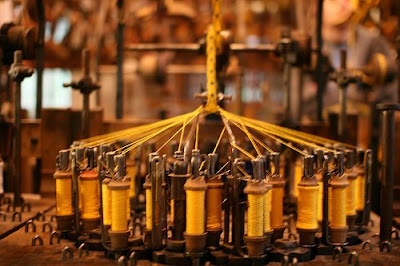 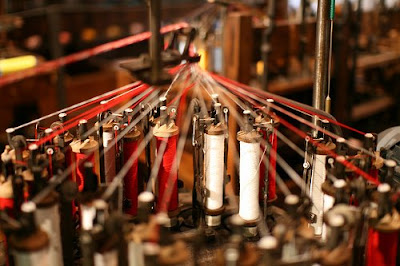 The popularity of handmade laces led to the invention of lace-making machines. The first machine lace appeared in the late 1700's. It developed from a machine that made fancy knitted stockings. This early version of netting was made in England by Hammond. Others improved on this looped lace and it became very popular as a base to embellish with needle run designs and allowed resurgence in the demand for this more affordable lace.

Updating and changes continued for years until an new machine was produced in that was more like lace in that it wove netting that closely resembled the twisted netting of handmade Lille bobbin lace. As a boy, John Heathcoat made stockings and became familiar with the machines and used this knowledge to develop and patent his lace net machine in 1808. This invention created an enormous lace industry. At first, the netting was embroidered with a needle or tambour chain stitch. Limerick Ireland became famous for it's exquisite embroidery of this twisted net. Carrickmacross Ireland created their own lace by appliquéing a fine muslin on the net. They also sometimes added embroidery as well.

The next important step in the evolution in machine lacemaking came about with the invention of the Pusher machine. This was the first development that was capable of putting a pattern in the lace with the machine. This pattern was then outlined with a raised thread called a gimp. The gimp was applied by hand and sometimes the handrun gimp was the only way to tell the difference between the real 'Chantilly' lace and this very good imitation.

Shortly after Heathcoat patented his machine, John Leaver developed his 'Leaver' machine which, by 1805, had been modified with the system invented by Joseph Jacquard and now was able to make lace entirely by machine. By 1841, the last great development was added which allowed the machine to also incorporate the gimp. Once this was accomplished, the use of lace machines developed so quickly that the market was soon flooded with this new inexpensive lace.
Posted by Sharon at 8:24 PM