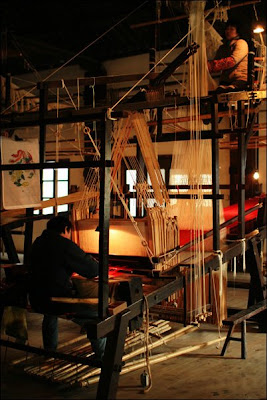 Two people are required to operate a draw loom 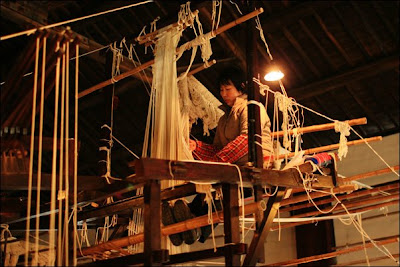 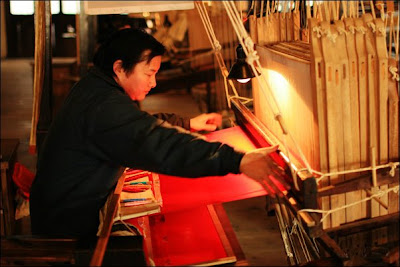 This kind of Chinese draw loom is the highest achievements in ancient China, it's Chinese name is da hua lou ji.
The famous Nanjing Yun brocade is woven on this traditional Dahualou draw-loom, 5.6 m long. It is 1.4 m wide and 4 m high, through the coordinated manual operation of a thread puller and a weaver. This draw loom is made up of 1,924 parts. The thread puller sits on top of the loom and lifts the warp while the weaver, sitting under it, weaves the weft with gold and colored threads.
The thread puller pulls the thread according to a threading sequence, in a similar way to computer keyboard typing. The weaver applies his skill of "passing longitude and cutting woof" -- the woof consisting of connected fine colored filaments. He twines the materials and weaves the pattern into brocade of golden and colored threads. The woven piece of work before him could be regarded as his computer screen. No machine has yet been devised to replace this manual technique, yet thread puller and weaver are able to produce no more than a 5-6-cm length in one day.