India has a diverse and rich textile tradition. The origin of Indian textiles can be traced to the Indus valley civilization. The people of this civilization used homespun cotton for weaving their garments. Excavations at Harappa and Mohen -jo-Daro, have unearthed household items like needles made of bone and spindles made of wood, amply suggesting that homespun cotton was used to make garments. Fragments of woven cotton have also been found from these sites. 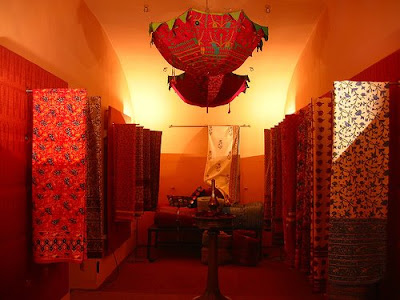 The first literary information about textiles in India can be found in the Rigveda, which refers to weaving. The ancient Indian epics-Ramayana and Mahabharat also speak of a variety of fabrics of those times. The Ramayana refers to the rich styles worn by the aristocracy on one hand and the simple clothes worn by the commoners and ascetics. Ample evidence on the ancient textiles of India can also be obtained from the various sculptures belonging to Mauryan and Gupta age as well as from ancient Buddhist scripts and murals (Ajanta caves). Legend has it that when Amrapali, a courtesan from the kingdom of Vaishali met Gautam Buddha, she wore a richly woven semi transparent sari, which speaks volumes of the technical achievement of the ancient Indian weaver. India had numerous trade links with the outside world and Indian textiles were popular in the ancient world. Indian silk was popular in Rome in the early centuries of the Christian era. Hoards of fragments of cotton material originating from Gujarat have been found in the Egyptian tombs at Fostat, belonging to 5th century A.D. Cotton textiles were also exported to China during the heydays of the silk route. Silk fabrics from south India were exported to Indonesia during the 13th century. India also exported printed cotton fabrics or chintz, to European countries and the Far East before the coming of the Europeans to India. The British East India Company also traded in Indian cotton and silk fabrics, which included the famous Dacca muslins.Muslins from Bengal, Bihar and Orissa were also popular abroad.(Muslin-a very thin cotton material) (Chintz-cotton cloth, usually printed with flowery patterns, that has a slightly shiny appearance). The past traditions of the textile and handlooms can still be seen amongst the motifs, patterns, designs, and the old techniques of weaving, still employed by the weavers.