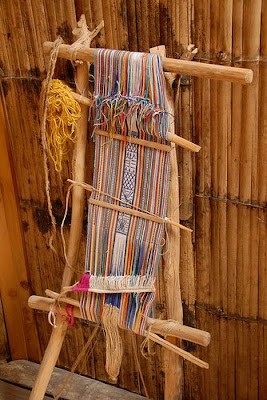 I had never seen this loom before. When i saw it, i was attracted to it. This loom's picture was found in Flickr，belong to Teyacapan, the following was his introduction.

"The Chachi (or Cayapas) people live in the rain forests of northern Ecuador on the western slopes of the Andes mountains. This traditional vertical loom was on display at the interpretive center at Lago Cuicocha. Vertical looms were the means of weaving cloth on the Pacific coast of Ecuador, and were still in use in the 1980's on Isla Puna in the Gulf of Guayaquil."

It looks like the weaving in progress was going to be a shoulder bag, but I'm certain that this type of loom is also used to weave wrap skirts. Traditionally, Chachi women went topless and wore only knee length wrap skirts.
Posted by Sharon at 1:08 AM